Brian McTaggart of MLB.com reports that Jim Crane of the Astros wants to move its Triple-A team to the Houston suburbs. Specifically, The Woodlands or Conroe, and the way they’d likely do it is to purchase an existing franchise and move it: 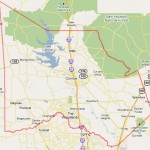 “Once we can get municipalities up there to agree on funding and building a facility somewhere, which hasn’t been done yet, we’d have to have a franchise to move in there,” Crane said. “So all of this is going to take two or three years, and we’re just trying to get ahead of it.”

“Until we get a firm deal from the municipalities in The Woodlands or Conroe, we’re not going to be able to put our money down to buy a franchise before we have somewhere to go with it,” Crane said. “We probably have the cart before the horse, but that doesn’t mean we can’t keep our nose down and figure out which team that might be.”

My initial impression from a real estate viewpoint is, while both areas would be very convenient and beneficial for the Astros organization, the Conroe idea seems the most appealing and offers more choices for location, with generally less traffic congestion. It also places the AAA team a little further north which would be less of a distraction for the main franchise.

Montgomery County is in the midst of rapid population growth, and, from my perspective as an avid baseball fan and ex-player raised in Montgomery County, it’s my opinion there would be a large local following for an Astros farm team if the plan comes to fruition. Fingers crossed that all parties involved find a way to make this happen.